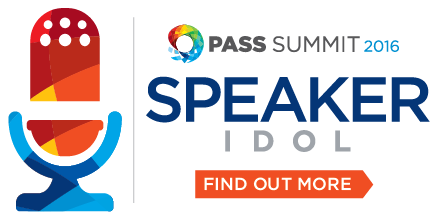 Becoming a speaker at the PASS Summit is always tough.  There are hundreds of people who submit almost one thousand sessions for the conference, and there are only a little over one hundred session slots available.  Needless to say the competition is tough, especially for someone who hasn’t every spoken at the PASS Summit so the speaker selection committee doesn’t know anything about your speaking style.

So a couple of years ago I had a crazy idea to steal the format and the idea for speaker idol from the TechEd conference and bring it to the PASS summit.   And PASS took a chance and let me run with it.

So now in our third year, the PASS Summit Speaker Idol competition is back.  We’ll be using the same basic rules as last year with some slight tweaks.

You must have spoken at one of the following events (in a format other than a lighting talk, where your session had at least 30 minutes of content delivered by you):

You have not spoken at the PASS Summit of PASS Business Conference for a breakout, spotlight or pre-con session. (If you gave a lightning talk and no other session you are eligible.)

You are not scheduled to speak at the 2016 PASS Summit.

You will be in Seattle during the PASS Summit (attending PASS isn’t needed, and if you aren’t attending PASS we will get you to the session room for Speaker Idol).

You are available to attend which ever speaker idol session(s) you are assigned to (including the final session on Friday afternoon).

You have a 5 minute technical presentation which you can give. (Time management is your responsibility.)

You are not a member of the PASS Board of Directors or an employee of PASS.

You are not employed by a sponsor of Speaker Idol

If a contestant drops out of the contest before the PASS Summit starts the organizer (Denny Cherry) will reach out to the next person on his list that wasn’t accepted and offer them an position in the contest.  People will be offered spots in the competition until someone accepts.  The organizer will NOT announce how many people if any turned down a spot in the competition.

If a contestant drops out of the contest during the PASS Summit (for purposes of this clause “during the PASS Summit” is defined as from the time that Denny gets to Seattle, which will probably be Saturday or Sunday before the conference, until Friday afternoon) no changes to the lineup will be made.

If a judge is not able to complete the competition they will not be replaced.

The wild card winner will be selected by the judges at the end of the Friday morning round from the runners up from each round.  If a winner is not able to compete in the finals, and the runner up is already speaking in the finals, the judges may consider all contestants from that round as eligible for the wildcard slot.

Judges do not have to recuse themselves because a friend is in the competition.  Judges are expected to be fair.

You are responsible for your own travel to the PASS Summit to compete in this competition.

You may present your session in any format that you’d like.  You can view last years recordings via PASS TV.

While you can use any format that you’d like, it is recommended that you use a format which will show the judges how your presentation skills will translate from a 5 minute session to a 60 or 75 minute session.

Contestants are allowed to watch the other sessions during speaker idol and make changes to their presentation as they see fit.

In case you missed it above, the Sign Up Form is <- there.

Stay tuned for announcements on the judges and the contestants.  (Judges won’t be announced until after the PASS schedule is finalized as I need to see who’s available for the sessions.)