As we all know by now AlwaysOn Availability Groups are an enterprise edition feature and SQL Server Clustering is a standard edition feature.  Butt what happens when you have a small business that is running its apps on SQL Server Express.  Can’t SQL Express have any sort of high availability?

Officially the answer is no, however with a little bit of creative configuration you sure can.

As SQL Server 2012 express edition doesn’t support Windows Clustering out of the box the installation will be a little different from doing a normal clustered install under standard or enterprise edition.  To install I did a normal SQL Express install on node1.  The only change from a normal install that I made was that I configured the SQL Server instance to start under a domain account.  When I got to the data directories part I configured the data folder to a network share on the domain controller.

The installation on node2 is done exactly like it was done on node1.

Once the installation on Node2 is done the cluster can be configured.  To do this bring up the Failover Cluster Administrator on one of the nodes and connect to the cluster.  If the cluster hasn’t been configured yet run through the normal Clustering Configuration wizard.

We’ll now configure a new cluster role on the cluster.  To do this right click on “Role” then select “Configure Role” from the context menu as shown below. 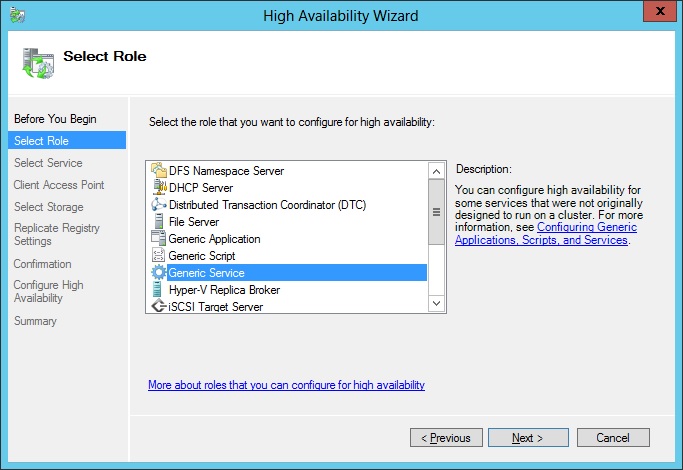 On the next screen you’ll be asked what service you wish to cluster.  From this list select the SQL Server service as shown below.

The next change that you’ll need to make is to change the local server name in the master database from the name of the last node which was installed to the cluster name using a script similar to the one shown below.  In the case of this script the nodes are named node1 and node2 and the cluster name is clustersql. Once this script has been run the SQL Server instance should be restarted or failed over to the other node.

At this point the cluster is up and running and applications can have their databases configured on the SQL Server Instance.