Back To Basics: Files, File Groups and Disks

SQL Server has three different storage terms which you need to know when dealing with physical file storage.  These are files, file groups and disks.  While each one of these is totally different, then work together giving the SQL Server database engine a very flexible way to define where the data is actually stored. 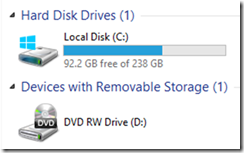 ghts on them that flash.  In larger environments where there are lots of servers you may have a storage array (also called a SAN).  In it’s simplest terms the storage array is a bunch of disks that are in one large box.  The space on these small disks is put together in various ways and parts of this space are allocated to specific servers.  While the storage array may have anywhere from a couple of terabytes to thousands of terabytes the specific servers will only have access to a very small percentage of this space.  In either case, either using local disks in the front of the server or a large storage array the concept is the same as far as SQL Server is concerned.  The storage that is connected to the server is presented as a drive letter in Windows.

If you were to log onto the console of the server you would see an computer which would look very familiar to you.  This is because the computer running SQL Server in the server room or data center is running Windows just like the computer which is on your desk and just like the computer at your home (assuming that you aren’t using Linux or a Mac).  If you opened the My Computer on a server you would see hard drives just like you do on your home computer.  On the server there are probably more hard drives than your workstation or home computer and the drives on the server probably have a lot more space than the ones on your workstation, but the idea is still very much the same.  Any files that are needed are written to the disks and then accessed by users or by programs, with Microsoft SQL Server simply being a large complex program.

Each specific file exists on one and only one hard drive.  If you need to store the data on multiple hard drives then you’ll need multiple data files.

File groups are simply logical groupings of files.  We use file groups so that specific tables can be larger than any one specific hard drive.  If we didn’t have file groups when we created a table and we told the SQL Server where to store that table we would have to tell it which physical data file to store the data in.  This would mean that the tables would be limited by the size of the largest disk which was available.  Because we want to be able to spread our data across multiple physical files we have file groups.  The file groups allow for multiple files to be put into a single group.  SQL Server will then create the table within that file group putting portions of the database on all the files within the file group.  This allows us to have tables which are very large as we are only limited by the number of disks we can attach to the server and the size of those disks.

When we create a new table (or index, or service broker queue, or any other object which is a physical object which holds data) we specify which file group we want to create the object within.  This allows us to leverage any files which are members of the file group.  If there are multiple files the object will be spread over all the physical files.  If there is just one file today when we create the table but then we add another file to the file group later there’s nothing that we need to do.  The SQL Server will automatically begin using the new file as well as the old file.  When you add a new file to a file group SQL Server doesn’t rebalance the data across the database files, you have to do this manually by rebuilding all the indexes, but new rows would be written to the new file.

Hopefully this helped explain these three complimentary yet different concepts.