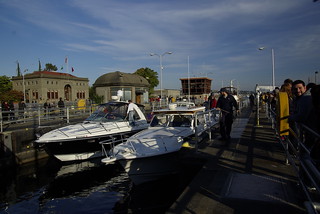 Couple of boats in the Ballard Locks in 2011

In the last post of this series, I talked about things to see/do in Seattle that are close to downtown and/or otherwise fit into the usual conference intraweek schedule. Today, I’ll hit five things that likely will require an extra day (or two) in your trip. It may be too late for extra days this year, seeing as we’re two weeks out, but maybe you can work one of these into your next trip to SEA.

http://www.ballardlocks.org/
http://www.nws.usace.army.mil/Missions/Civil-Works/Locks-and-Dams/Chittenden-Locks/
3015 NW 54th Street, Ballard, WA
OK, this one may be a little goofy, I know. North of downtown Nashville, there are a set of locks built between Puget Sound and Salmon Bay, which is connected to Lake Union, and eventually Lake Washington (Lake Washington is the big body of water between Seattle and Redmond/Bellevue). These are part of a full canal connecting the sound with the lake built 100 years ago to aid/assist shipping between the bodies of water. They’re still used today, and even during the time of year when Summit is going on, there can be a fairly steady stream of traffic. For someone from boring landlocked flyover country, this is a fun thing to watch.

There is also a fish ladder, primarily serving migratory salmon heading back upstream into fresh water as part of the complex. There’s a viewing area as part of that, where you can watch the fish swim upstream. The salmon are usually done swimming by the time of year that Summit is going on, though.

http://www.ci.woodinville.wa.us/
https://woodinvillewinecountry.com/
The city of Woodinville is located northeast of Seattle, across Lake Washington and outside of the 405 bypass. The main point of going to Woodinville (at last for us) is for wine and the occasional distillery. There are a lot of tasting rooms and the like in town, and it’s possible to drive (Lyft, whatever) out there and walk to a bunch of places in one morning/afternoon/etc. There are a few “districts” with clumps of tasting rooms/wineries that make this easy. There are also scheduled events that go on, if scheduling works out while you’re in town.

The Museum of Flight

http://www.museumofflight.org/
9404 E Marginal Way S
Located on-field at Boeing Field/King County International Airport (KBFI) (You know that other airport you drive by between SEATAC and downtown? There.), this is the largest aerospace museum in the world. It is home to a nearly-endless stream of aircraft, related artifacts, and other air-and-space exhibits. There’s something here for anyone with even a passing interest in aviation and possibly even those who don’t–although those folks will probably be more interested in walking around the Aviation Pavilion, the outdoor static display of large aircraft that’s part of the museum, where there are a good chunk of airliners–old, new, fast, and slow.

http://www.boeing.com/company/tours/
https://www.futureofflight.org/
8415 Paine Field Blvd, Mukilteo, WA
The Boeing Factory at Snohomish County Airport/Paine Field (KPAE) has the fun distinction of being the largest airport in the world by volume. Boeing lets us go on tours of their production lines here, which includes 777s, 787s, and the Queen of the Skies. There’s also the Future of Aviation center here, which is another museum-type apparatus.

https://www.usbr.gov/pn/grandcoulee/
http://www.grandcouleedam.com/welcome.html (Brace yourself for 1996)
WA-155, Coulee Dam, WA (this is literally the best I can do for an address)
This is where things get super-nerdy. See, my wife and I have a little bit of a thing about dams, so we make strange trips to, well, see dams. There happens to be a giant one–it’s almost a mile long–about four hours east of Seattle! We’ve still never actually made it out to this, because it’s probably a two-day thing due to the length of the drive. One of these years.