That’s one hell of a long title isn’t it? I ran across a little issue in our Office 365 account recently. That problem was users having the wrong outbound email address in Office 365. I was trying to figure out why a new account that I had setup in our dcac.co domain kept showing up in Outlook at username@dcassoc.onmicrosoft.com instead of username@dcac.co.

Well the reason that it was showing up this way was because that’s how Office 365 was configured, of course. Now when I create a user (we’ve never had Exchange on prem, so we can’t see any of the Exchange tabs) I setup the account for the user, let it sync to Azure and added the licenses and didn’t think anything of it.

Later I saw the issue. Fixing it is pretty easy, if you know where to look.

Fixing it before the user is in AAD

If you are creating a new user in AD, making it so that the account is created correctly is actually pretty easy. 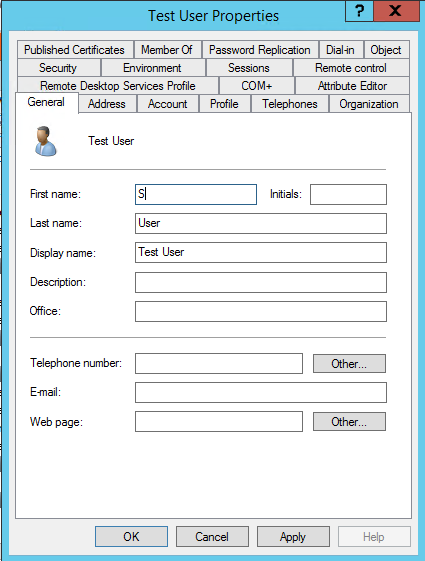 In the properties of the user, fill out the email address field in the users account. This will tell Azure Active Directory and Office 365 that the users outbound email address should be whatever you put in that field (assuming that it’s a domain that you have control over).

If the users account has already synced to Azure as you discover this problem, this won’t fix it (or at least it didn’t for me).

In the testing that I did, using this field to fix it only works on account creation.  But that’s ok, it’s still a pretty easy fix to fix this after the user has had their account synced to Azure.

Here’s what the user account looks like in Azure after the initial sync has completed with the email field blank.

Fixing it after the user is in AAD

If the user is in AAD, and Office 365’s Exchange properties shows the user as the onmicrosoft.com account, all is not lost. You don’t need to do anything drastic like deleting the user or anything.

In a domain controller, probably the one with AD Connect installed on it, open Active Directory Users and Computers.  Click on View then Advanced Features. 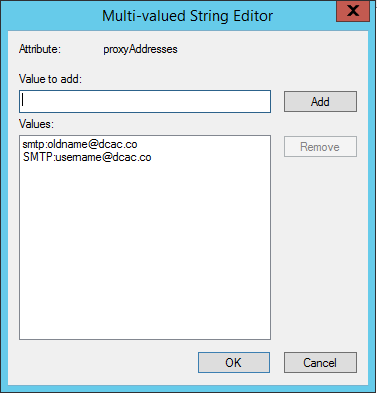 If we edit that we’ll get a dialog that allows use to add items to the list. Now don’t just add in email addresses, that isn’t going to work.  You can list all sorts of items in there.  Specifically we want to add in our SMTP addresses.  We do this in the format of smtp:username@domain.com.  In the case of our test user it’ll be testuser@dcac.co.  Now we can put in as many email addresses as we need them to get email at.  So how do we set the outbound email address?  We make the “smtp” part uppercase.

If you are a company that changes users email addresses when then change their name (they get married or divorced for example) then you’ll want to keep their old email address in there.  So you just set it as “smtp:oldname@domain.com” in all lowercase. 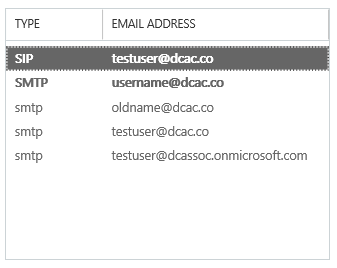 A fairly easy change, and no impact to the user, other than the impact that we wanted, which is that the users email address is now correct and matches the companies branding. It’ll take a while at this point for the users email address to be corrected in everyone’s Global Address List (GAL). It’ll take a little time, the GAL doesn’t update that often, but when it gets around to updating the users will all get the update.

This change can be made in PowerShell as well. In this case I’ve setup the PowerShell to only for against a single user, but you can setup the -Filter parameter anyway you need to in order to get things working the way you need.

I’ve left the -whatif in there so you can see what it’ll do before running it. You’ll want to be careful running PowerShell against your Active Directory domain as you can really screw things up if you aren’t careful. Be warned, if you already have values in this ProxyAddresses field, this will simply append to them. If there’s a default in there you’ll now have two and Office 365 will get cranky. So you may need more logic and checking in your script. But I’ll leave that to you.