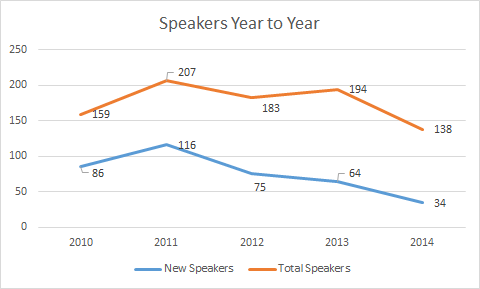 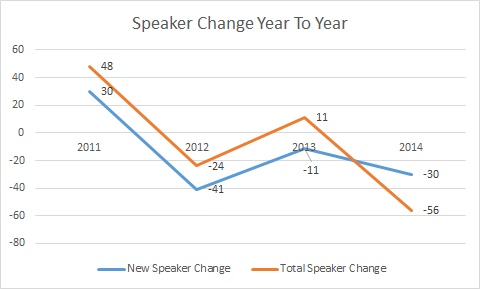 And if you prefer percentages instead of numbers, I made one of those as well (yes those 2011 percentages really are that high as this is change, not growth)…

If you haven’t figured it out by now, getting into the club of SQL PASS speaker is a really hard club to get into, and you’ve earned the spot which you’ve received.  Never let anyone tell you that don’t deserve that session spot, or that you took someone else’s session.  Sessions are given based on abstracts which means that you earned your spot.

Now do yourself and your fellow speakers proud this November.  Give a great presentation, don’t be nervous if someone you’ve seen present comes and sits in your session, and have a great time at the PASS Summit.  There’s nothing like speaking at PASS, so have fun and enjoy what’s probably your first (and hopefully not last) session on the big stage of international conferences.

UPDATE: The speaker count for 2014 does NOT include all Microsoft speakers as they haven’t been announced yet. This is one of the reasons that the speaker count is lower for 2014. Another is the fact that this year a lot more speakers have two sessions, where in previous years only a few speakers have had more than one session (see graphic which I stole from Kendal below).