Any Little Thing Can Kill a SQL Server Upgrade

Then I get to the SQL 2014 installer. I get all the way to the end, when it fails. All because the folder E:MSSQLMSSQL10_50.MSSQLSERVERMSSQLJobs isn’t there (SQL is installed on the E drive). All the other folders were there, just this one wasn’t. Now honestly I have no idea why this folder even exists. To the best of my knowledge and remembering there’s never been anything inside of it in the 15 years that I’ve been working with SQL Server. God forbid the installer just create this folder and move on, or I don’t know check to see if it exists during one of the three rules checks that it does during the install process.

So fine, I created the folder and reran the installer. Only to be created with this annoying screen. 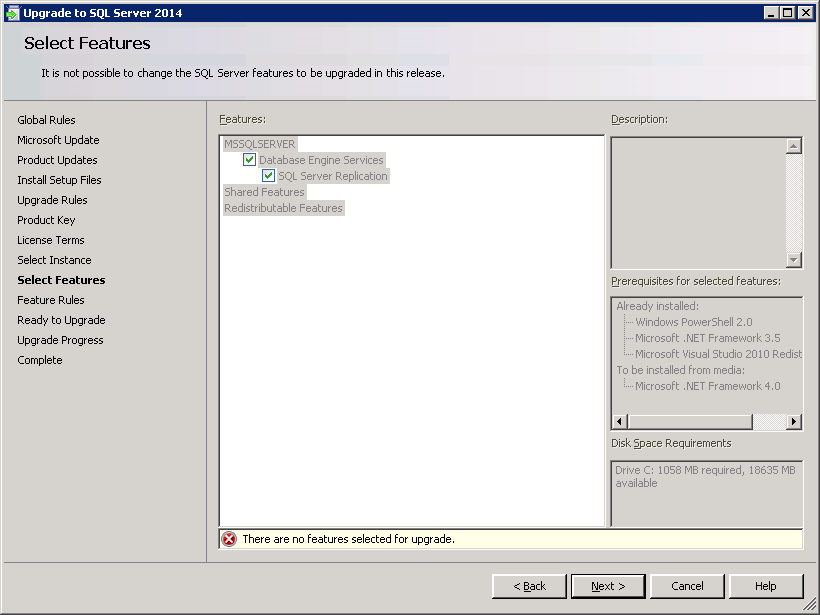 According to this annoying little screen I’ve got two components to upgrade, but it says that there’s no components available to upgrade. So that’s awesome. Way to be consistent Microsoft.

Once that was done the install was totally hosed. SQL wouldn’t start. It would just give me a warning about a corrupt installation. Attempting to start it from the command line wouldn’t help either. Hell the command line upgrade process installed the bits and removed the 2008 R2 bits, but didn’t bother to change the service to point to the new files, which apparently is fine because the rest of the SQL install is hosed now.

The upgrade process couldn’t find anything to work with either.

The next thing that I tried was to add the features that I needed (the SQL Database Engine) through the normal install wizard so add features to an existing installation. At this point the SQL installer didn’t even see an instance on the server, so there was up add features option. I was simply prompted to do a normal install of SQL Server 2014. When I went to install it stopped me from using my Instance ID which was MSSQLSERVER because it was apparently already in use by the SQL Server instance “MSSQLSERVER.INACTIVE”, what ever the hell that is.

Fixing this required using this blog post which talks about how to get rid of this instance manually. If you read the instructors here and think “damn that’s crazy”, yep you’re right it is.

The database installed successfully. However it didn’t pick up the databases and attach them. The database that I was really hoping that it would pickup was the distribution database for replication so that I wouldn’t need to recreate all the replication by hand. How I deal with that is for another blog post.

The moral to this post is that apparently you need to make sure that every single folder is where it should be before you try and upgrade SQL Server from one version to another. Otherwise a 45 minute process could easily take you hours to get through.