My First Days With Windows 8 RTM

As I'm as MSDN subscriber I was able to download Windows 8 from the MSDN website on August 15th and get it installed.  At this point I've upgraded all three of my machines so I wanted to give you a review of what I like and don't about the new OS.  Before I go on I'm not going to bitch and moan about the new start menu (or lack of a start menu).  I've been using Windows 8 as a beta or test version on at least one machine for months now, and I've been using only the Windows 8 beta versions for about 6 weeks so I'm used to the new start menu.  Once you get all the useless icons that you'll never use off of the start menu (by right clicking on them and then clicking the "unpin from start" button at the bottom) it makes things a lot easier.

Do keep in mind as you read this, I'm not a PC gamer, so I'm not pushing my systems to 100% all the time.  I'm a normal IT worker so I've got a bunch of pretty random apps installed but I don't push the systems to their limits at all.  Also I've got SSD drives in all the machines so the disk speed isn't a bottleneck.

The first thing that you'll notice with Windows 8 when you log in is that the interface has changed a bit from the beta versions and Windows 7.  The default theme is more "metro styled" with white borders around all the applications instead of the more translucent borders that there were in the Windows 8 beta and preview releases.

From a day to day usability perspective I haven't really had any problems with Windows 8. I got really lucky on the driver side of things as both my laptops and my desktop were fully supported.  I'm still waiting for HP to get around to getting updated drivers but that isn't suppressing.  As Hyper-V is now a feature of Windows 8 you can simply create a Windows XP Virtual Machine (you'll need a Windows XP license and install media for this) to install the HP scanner software (for example) so that things like your HP scanner work.  Windows 8 did a great job of finding my network printer and installing and configuring it automatically for me.

All of the things that I need to do on the machine I can do easily.  There's a few annoying things to get used to, like you can't hit the Windows key on the keyboard then control panel as it isn't there any more.  The easiest thing to do to get into the control panel is to open My Computer then click the computer tab at the top, then click the "Open Control Panel" icon.

Most of the old keyboard shortcuts from Windows 7 and earlier still exist.  In fact there’s a list of keyboard short cuts available here.

So far I haven’t really had any major application compatibility issues to speak of.  The big annoying one was the Cisco VPN installer (big shock I know) which would either crash, or crash the machine (usually the machine).  The fix was pretty easy, just run the installer in Windows 7 compatibility mode.  After that there’s a registry key that needs to be changed manually to get it to work (talked about here).  The key that needs to be fixed can be found at HKEY_LOCAL_MACHINE\SYSTEM\CurrentControlSet\Services\CVirtA.  Change the DisplayName key to either “Cisco Systems VPN Adapter” or “Cisco Systems VPN Adapter for 64-bit Windows” (depending if you have a 32bit install or a 64bit install).

The only other issue that I've run into so far is that the VMware vSphere management tool doesn't allow me to view the desktop of the virtual machines as there's some conflict probably with Visual Studio (which is a requirement of the full SQL Server 2012 tools).  So far I haven't been able to find any solution to this problem in the long term.  Some have reported that reinstalling vSphere fixes it, but that hasn't worked for me yet.

The other applications which I use on a daily basis have been working pretty smoothly.  Things like the Windows VPN, IE, FireFox, SQL Server Management Studio, Office 2010 and 2013 beta, QuickBooks, Skype and VMware Workstation all appear to be working together without an issue at all.

One thing that I have noticed is that when copying files between machines is much faster when doing Windows 8 to Windows 8.  So doing things like backing up my VMs from one machine to another is very quick.

When it comes to battery life I've had a pretty good experience.  It seems like Windows 8 is less CPU intensive than Windows 7 was so my battery lasts a little bit longer than it did with Windows 7.

Windows 8 has a really nice file transfer dialog box (shown below) which makes it a lot easier to figure out what's going on with file transfers.  If you start up multiple transfers they will all be stacked into one window, instead of having lots of different windows one for each transfer. 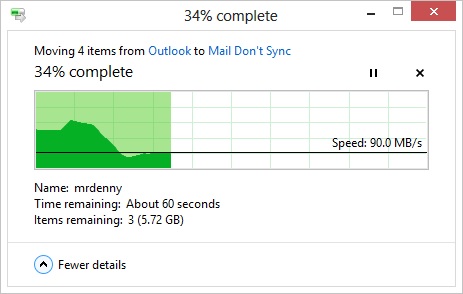 Over all I’ve been pretty happy with Windows 8 (I must be as I upgraded to it on day 1).  Give it a try.  I admit that the start menu and other changes will take a little getting used to, but there’s no way around them as I’m guessing that they aren’t going anywhere any time soon.