Getting Started with Polybase—Incorrect Syntax near ‘EXTERNAL’ Error

I was playing around with configuring Polybase this morning. Nothing to exotic, just installing the feature getting started. I got everything installed and was about ready to created my data source. The command to that is as follows:

Unfortunately, it returned the following error:

So what was the fix? A reboot after installing Polybase. The official documentation refers to restarting SQL Server, which I did. Nothing warned me to reboot, but rebooting fixed the error.

Note: While I do have business relationships with many vendors, I do not have one with SQL Sentry aside from attending their great annual party at the PASS Summit.

SQL Server allows us to have access to two types of execution plans, estimated and actual. Actual execution plans give us the real row counts and statistics the optimizer gets when executing the query, while the estimated plan displays the estimates the SQL Server optimizer used based on statistics when it generated the plan. The ideal scenario for performance tuning is to have the actual plan, but when you are dealing with a long running query that runs hours, and a busy procedure cache, that can be a real challenge to get.

So yesterday, I was helping a friend tune a couple of queries, one of which was running hours, and one of them was running in minutes. So I got my hands on the estimated execution plans, and I loaded them quickly in SQL Sentry Plan Explorer (which has a free version). I can’t recommend this tool enough—for simple query plans Management Studio is ok, but the second you have any level of complexity, Plan Explorer allows you to quickly break it down and identify where the problems are. As in this case:

I quickly honed into the fact that the bad query was doing a lazy spool with 6 BILLION rows versus the 229 million in the good query. However, my friend who was looking at Management Studio was asking where I was getting those numbers. This is what the XML from the original plan showed:

I made the assumption that Plan Explorer was doing some math on the execution plan, so I contacted my good friend Aaron Betrand (b|t) who works at SQL Sentry and asked him about it. His response was that “Plan Explorer will sometimes adjust the displayed row counts for certain operators where we know execution count is greater than one”. This is a really great use case for getting better data out of estimated execution plans when that is all you have to work with.

Are You Still Installing SQL Server from the GUI?

I have seen it all. "I imported SQL Server's registry from another machine but it won't start." <- No s#!+

A little bit of a story—I once had a client who was insanely worried about renaming SQL Servers for a migration. Note: It’s no big deal to rename an offline SQL Server—the ONLY thing you need to change is the internal server name by running sp_dropserver and sp_addserver. There is a single registry key called “ORIGINAL_SERVER_NAME” it stays the same across multiple server renames. Every other SQL registry key changes when you do a rename of the server. So there is nothing to worry about in the registry if you do a name change. This name change process was part of our automation strategy for cloud at Comcast, and if I had to guess, it’s also part of what Microsoft is doing in Azure.

Anyway, on to my original topic—I know most shops aren’t Comcast where we were deploying multiple servers a week. However, automating your installation process has a lot of other benefits—you don’t have to worry about misconfigurations, unless you put in into your script. It also forces you into adopting a standard drive letter approach to all of your servers. So when something breaks, you know exactly where to go. And more importantly you save 15 minutes of clicking next.

I love this comic from XCKD. It doesn’t take a lot of time to automate this process. So how to you do it?

It’s easy—run through the installer, and use all of your best practices, service accounts like you would for any new install. When you get to the end, before you click install. You’ll notice this: 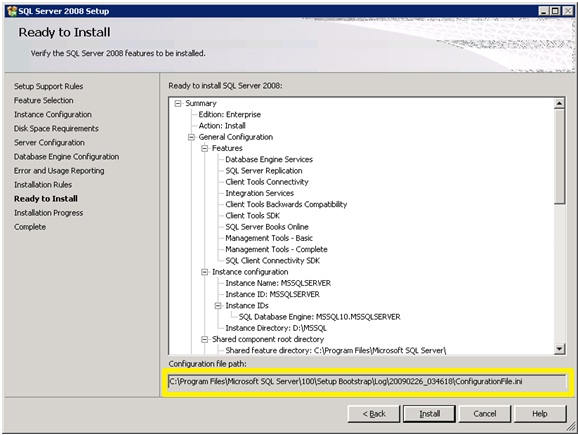 See that file—save it somewhere handy and then cancel out of the install. There are a couple of edits you’ll need to do to make it automation ready, the biggest is you want your install to either run in quiet or quiet simple mode (I prefer quiet simple—it shows the GUI, but doesn’t allow any interaction with it). From there it’s as simple as running the following command (assumes you have the SQL media mounted under D: )

Webinar—HA and DR in the Clouds

This Thursday (21 January 2016 at 1 PM EST/1800 GMT) I will be doing a webinar in conjunction with SIOS and MSSQLTIPS.com on disaster recovery and high availability in the clouds. This webinar will cover techniques and requirements around high availability and disaster recover in the cloud, specifically around Microsoft Azure. We will talk about several different platform options, and some of the new features in both Windows Server 2016 and SQL Server 2016 and how they affect your architecture.

You can register here:

I look forward to you joining me on Thursday.