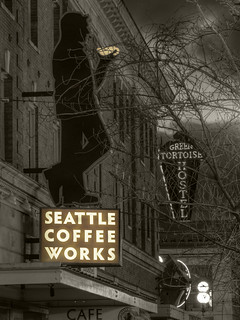 It’s now October (OK, over a week in), and that means for a lot of us SQL Server folks, we have the PASS Summit in Seattle to look forward to at the end of the month. Yes, fine, it tends to fall in November more often.

ANYWAY, a lot of us have gone there for a lot of years, and so we’ve seen a good chunk of downtown and know some good places to eat/such and things to do. So, although Denny’s already done his annual “Summit Firsttimers” webcast, I’m adding some more places/things for newbies and veterans alike. I’ve got five lists of five things coming up over the coming weeks to help you find some good coffee, fun things to do, and where to find all of us crazy people who tend to stay up too late most nights.

There’s a lot of good coffee and good food in Seattle, a lot of which is close to the convention center or otherwise within walking distance. This list of five places–in no particular order–are some of my favorite places to fuel up during the long week of partying learning.

https://www.victrolacoffee.com/
310 E Pike St
I tend to forget the actual name of this place, so will refer to it as “telegraph” or similar old technology thing when I can’t get it together. This place is up on Capitol Hill up Pike St from the Convention Center and is home to some of the best coffee in town. It’s one of Joey’s favorite places to go, although it is a bit of a hike to get there, plus it can be a total house in the mornings. It’s still worth it, as the coffee truly is great.

www.seattlecoffeeworks.com
107 Pike St.
In the opposite direction, down towards the Sound and the market and also on Pike Street is Seattle Coffee Works. As drinking coffee from the same place all week may not be what you’re looking for (also, you’re in Seattle, spread the love), this is another great option.

http://cafecampagne.com/
1600 Post Alley
Do you like Croques Madame? Do you know what a Croque Madame is? If you answered yes to these–or you just looked up what it was and decided you can’t live without one now (good choice)–there’s this awesome little French restaurant/café in Post Alley in the Pike Place Market. Croques, real baguettes, the menu’s mostly/all in French, so yeah. If you’re into this sort of thing, it’s a nice Saturday or Sunday morning before you head out of town stop, but get there early, because this place gets pretty busy pretty fast in the mornings.

http://www.lacreperievoila.com/
It’s in the Convention Center. On the street. Next to the Subway. No, the other Subway.
This is handy for grabbing breakfast on the way in or a mid-afternoon snack. Pretty cheap, pretty good, and location, location, location.

http://roastery.starbucks.com/
1124 Pike St
Yes, not everyone likes Starbucks, I know. But, a few years ago, Starbucks built this enormous coffee roastery, tasting room, and general temple to the coffee bean. It’s a neat place to go to due to the elaborate coffee conveyor belts that populate the place to feed the roasters. They’ve got some good single-source coffees here and other stuff that you can’t get in regular Sbux stores, and unique mugs & such.